Ataturk's Planning Of The Turkish Revolution: The Unknown 6 Months In Istanbul

November 13, 1918. The day Mustafa Kemal arrived in Istanbul, just two weeks after the signing of the Armistice of Mudros. May 16, 1919. The day he left Istanbul for Samsun on the Bandırma steamship. This book relates the adventure that took place during the intervening six months. It is a story that has never received the treatment it deserves, but that has now been remedied. These six months were essentially the planning and preparation phase of the war of independence.

Dr. Alev Coşkun gives the reader a masterful and meticulous account of Mustafa Kemal’s daily contacts in the context of political developments with commentary on the significance of these events. On the one hand we see minorities supporting the occupying British, French and Italian forces, spies brazenly operating everywhere and British sympathizers, and on the other hand, we see the Turks, exhausted, helpless and grieving the fact that their capital is now occupied. This was the catastrophe to which Mustafa Kemal and his comrades sought a remedy. It is a breathtaking six months filled with incredible events.

The original name of this book was ‘Samsun'dan Önce Bilinmeyen 6 Ay İşgal, Hüzün, Hazırlık "(The Unknown Six Months Before Samsun: Occupation, Grief and Preparation.)" Because the book covers in detail the six-month period during which Atatürk planned the revolution that would lay the foundations of the Republic of Turkey, the book’s English title makes reference to the Turkish Revolution.

The author’s straightforward and easy-to-read narrative was first published in Turkish in 2008. The events related in this rigorous historical work are fully documented and skillfully woven together. The book is in its 24th printing and has sold 100,000 copies, proof that it is achieving its mission of “passing on” the history of the Republic of Turkey to the next generation. 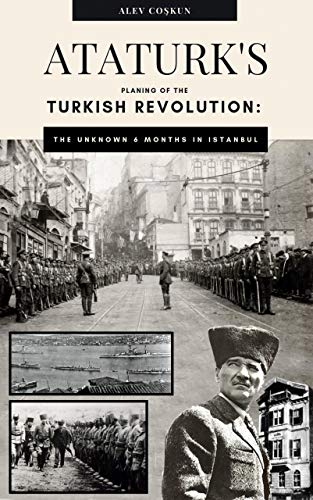 Alev Coşkun, the author of Ataturk's Planning Of The Turkish Revolution: The Unknown 6 Months In Istanbul, regularly reads articles and books about many and varied topics when he is not writing.