The Thing: The Virus and the Mysterious Spreading Of Scary Thoughts

In this fantastic story, a bunch of youngsters wrestles against the dramatic and sudden changes brought by the virus. They use the spreading of the virus to propel themselves ahead of their time. With the tide that the virus brings, they find the strength to overcome some of their inner issues that were denting their development.

There is an intriguing interplay between characters who knit with the long thread pulled by the virus to weave a net that eventually and almost miraculously defeats the virus. At least for the time being!

In a few points, it seems that Aileen, the protagonist, is happy to let her new and remote friends take the lead; albeit for as long as it is necessary.

The youngsters are particularly skilled at critically questioning, with their eyes of innocence, the myriad of new specific words and expressions that the virus has brought along with it.

Hope is what the protagonist, her family, and her new online acquaintances use as a tool for knitting.

The Thing: The Virus and the Mysterious Spreading Of Scary Thoughts written by Cosimo Buffone, writing as Kosmos Socyl, is a must-read.

To purchase the book, go to: https://amzn.to/3rWRyn7 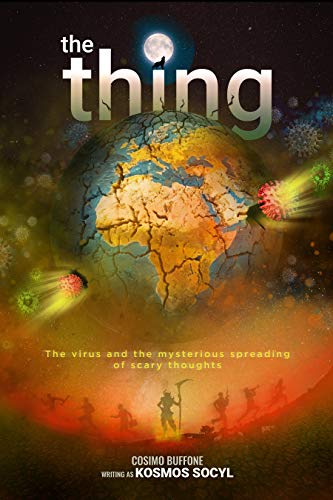 Cosimo Buffone, writing as Kosmos Socyl, is the author of The Thing: The Virus and the Mysterious Spreading Of Scary Thoughts.

He has a technical background and spent most of his adult life chewing numbers to design parts and systems as well as predicting their behaviour. From time to time he likes to write technical books and scientific articles.

Lately, his life has inspired him to open a door to a new world. It took a good few years to get to know this unexplored part of himself. In fact, he discovered some hidden capabilities that had remained in the shadow.

This latter journey on which he embarked (at first for reasons beyond his will) has compelled him to slow down and transform himself from a 'doing person' into a 'thinking one.'

However, he still reads a lot about psychology, history (preferring biographies), history of religions, music, and some philosophy.

He does his best to infuse his writings with the best of what he has learned during his reading sessions.

After all, a voracious reader makes a prolific writer.

Next, he would like to write some fiction novels which are much more based on psychology.

When he is not writing, he regularly reads articles and books about many and varied topics.