The Ghost Crow (A Tale of Andor)

Afraid that ghost guts might stick to her if she stepped through them, thirteen-year-old Dumdie Swartz still cringes when she encounters them.

Her strange attempts to avoid spirits create a lonely life.

Her sisters constantly mock her strange behavior, her parents are clueless, and her social life is zero. Dumdie finds solace working in a shared garden with her elderly neighbor, Mr. Carson. When teens from her high school steal pumpkins from his garden, Mr. Carson is hurt during the theft, and later, dies.

She learns there are stranger things than ghosts, when she senses something evil living in Kyle, one of the boys who had raided the pumpkin patch. Kyle bullies Dumdie to scare her into silence. The more Kyle threatens her, the clearer she perceives the evil thing possessing him. Dumdie finds support in an unlikely group of girls who befriend her when she helps them with their costumes for the Pumpkin festival. During the festival, Dumdie’s fears explode when the thing possessing Kyle decides it wants to possess her.

This supernatural short story is the prequel to The Ghost in the Closet. Download to read about Dumdie, young and old, free. If you like the story, a review would be appreciated.

For more information, go to: https://amzn.to/2VNADEx 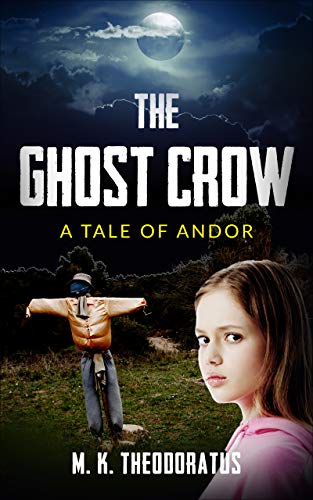 M. K. Theodoratus, the author of The Ghost Crow (A Tale of Andor), readily admits that she is one of those weird people who has played with fantasy as long as she can remember. Had a pretend friend by the time she was three, play acted elaborate fantasies even after she learned not to talk about them, read loads of Silver Age comic books, and discovered Oz, A. L. Merritt, Andre Norton, and Fritz Leiber before her teens. Some of her favorite authors now include Alexander, Briggs, Belcher, Cooper, Croogon, Pierce, Butcher, Elkins, McCrumb, Gaiman, O'Connell, etc. etc. etc.

The gears changed to include writing fantasy after the sixth grade. Before then, mysteries ala Nancy Drew, were her favorites. Most of her fiction writing has been lost through the years. But most of all, she still has the Clue of the Clay Cats, written in the sixth and seventh grade, sitting in some file drawer.