Growing up on his father's ship was an adventure for young John. His world crumbled the day the Barbary Pirates took him away in chains, along with his mother and sister. Five years later, after a daring escape to America, John is eager to join the USS Philadelphia and meet the corsairs with steel.

Then, one stormy night, a stranger brings word: His sister, Kaitlin, is alive. John must risk everything on a bold plan to sail to the Barbary Coast. To defy the odds and free his family, he'll need his skill with a blade, his leadership in battle, and his wits at sea. In his path - cutthroat smugglers, ruthless pirates, and a deadly foe bent on destruction.

Yet in John Sullivan's heart, the fires of revenge blaze ever hotter, threatening to burn those he loves. In his bid to save the lost, he may find his most dangerous enemy lies within…

For more information about this book, go to: https://amzn.to/2G5JfyO 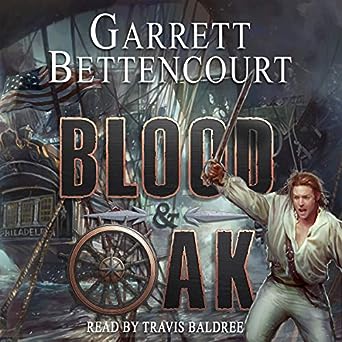 Garrett Bettencourt, the author of Blood and Oak, always loved telling stories, from the illustrated travels of a shipwrecked boy when he was eight, to a novel of pirate adventures when he reached high school. His love of adventure and the unexplored gave him a passion for space, science, history, high fantasy, and the ocean. His penchant for all things nautical led him to spend two and a half years researching the early U.S. Navy. The result is book 1 of Blood and Oak, an epic series of swashbuckling high seas adventures.

Garrett currently lives in the desert city of Scottsdale, Arizona, but still dreams of the sea. He's hard at work on the second installment of Blood and Oak: Wolves Will Eat.